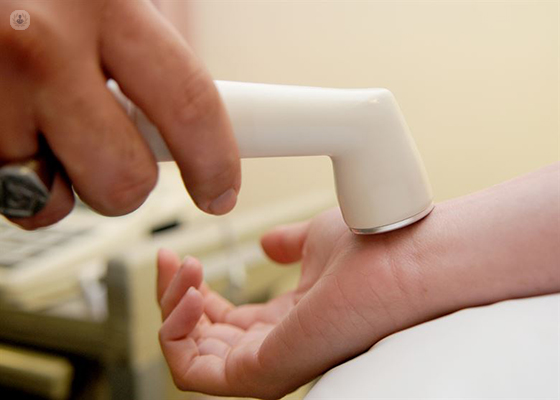 What is ultrasound therapy?

Ultrasound therapy is a physiotherapy technique that is involves using ultrasound, i.e. sound vibrations greater than 20,000 Hz to treat soft tissue lesions, such as muscle injuries and tendonitis.

Sound is formed by vibrations. The acoustic spectrum is split into three zones:

As a vibration, ultrasound is a form of mechanical energy exerting a thermal and a mechanical effect on the body. Studies have shown it has the ability to affect living tissue; however, there is remarkably little evidence to show that it has therapeutic value beyond the placebo effect.

Why is ultrasound therapy done?

Ultrasound therapy has different uses, depending on the stage of the pathology to be treated. It is usually used for the treatment of:

However, there are certain contraindications inherent in any thermotherapy. Thus, application in sensitive structures such as eyes, eyelids, heart, and pregnant uterus, epiphyseal plates in children, brain, spinal cord, testicles and ovaries is not recommended.

What does it consist of?

To carry out the ultrasound therapy, a gel or lotion is applied to act as a conductor, and a device that admits ultrasound waves is moved over the affected area.

Ultrasound can have a thermal effect upon the tissue, which may cause increased blood flow, reduction in muscle spasm, increased extensibility of collagen fibres and a pro‐inflammatory response.

Non-thermal effects are arguable more important, including stable cavitation (gas-filled bubbles expand and compress due to pressure changes in the tissue fluid because of the sound waves) and acoustic microstreaming.

Ultrasound is often used in conjunction with other physical therapies such as stretching and strengthening exercises to stimulate tissue regeneration.