What is pulmonary embolism?

Pulmonary embolism is a sudden blockage in a lung artery. When a blood clot, called a deep vein thrombosis, occurs in your leg, it breaks off and moves through the bloodstream until it reaches the lungs.

Pulmonary embolism is a serious pathology that can permanently damage the affected lung. Low oxygen levels may result in damage to various organs in the body due to not receiving a sufficient amount of oxygen. In cases where the clot is large, or there are many clots, the embolism can cause death. 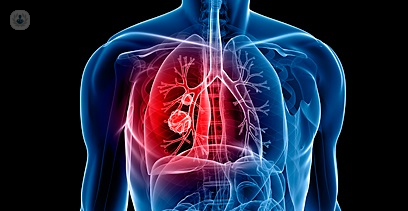 In up to 50% of cases, a person with a pulmonary embolism has no symptoms. If they do have symptoms, these may include shortness of breath, chest pain, or coughing up blood. If there is a clot, the person may have symptoms such as heat, swelling, pain, tenderness, and redness of the leg. Treatment to remove these symptoms involves breaking up the clots and preventing new clots from forming.

Pulmonary embolism is caused by the blockage of a blood vessel, technically known as thrombosis. The clots originate in the veins of the pelvis or the legs and are carried into a pulmonary vessel. The embolus, the part that detaches from the clot, reaches the right ventricle of the heart and continues to the right or left pulmonary artery. If an embolus is large enough it can block a blood vessel and trigger the various symptoms.

In terms of risk factors, these can be acquired or genetic. Acquired risk factors include surgical operations, serious spinal injuries, medication, cancer or pregnancy. Genetic factors are inherited in your DNA, such as a greater disposition to blood clotting disorders.

Pulmonary embolism can be prevented and the best ways to do this are to practice sports regularly to keep blood circulating in your legs and to avoid risk factors that influence pulmonary embolism, such as obesity. Read about managing deep vein thrombosis here.

What does treatment consist of?

The recommended treatment for pulmonary embolism is to use anticoagulants. Drugs such as thrombolytics or interventions such as the implantation of vena cava filters may also be used to speed up clot removal or to prevent the clot from reaching the lungs.