What are the menisci (meniscus)?

The menisci are two fibrocartilage structures located inside the knee. They improve joint function, acting like shock-absorbing cushions that help disperse the weight of the body and absorb forces exerted on the knee. They give the knee stability and play a key role in the proper functioning of the joint. The knee joints are among the most vulnerable joints of the body and can suffer serious injuries. They need to be able to withstand great pressure and to absorb and dissipate forces, which makes their role fundamental. 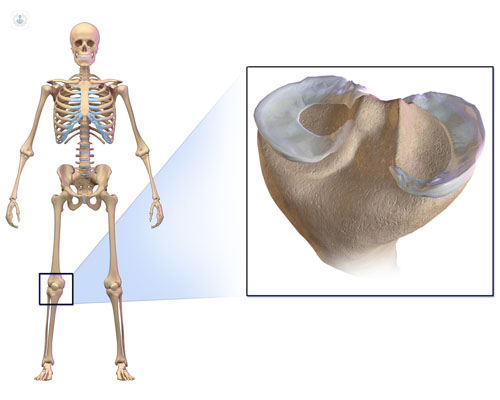 Function of the menisci:

The menisci have various functions:

Pathologies of the menisci:

Certain movements of the knee can cause injuries to the menisci, when they do not follow the movements of the femoral condyles over the tibial plateau. This happens if, for example, the knee is suddenly extended, which is very common in football players. In this case, there is no time for the meniscus to move forward, so it is trapped between the femoral condyle and the tibial plateau.

Another type of injury is distortion of the knee joint, with external rotation and lateralisation, causing the meniscus to slide under the convexity of the internal condyle, resulting in a longitudinal tear of the meniscus. Moreover, a torn internal ligament can also lead to a torn meniscus.

Meniscus tears are one of the most common injuries. Although common in athletes, anyone can suffer this injury. There can be different types of tears, but the most common tears are longitudinal, parrot beak, flap, bucket handle and mixed/complex. In the case of sports injuries, these are usually accompanied by ligament injuries.

Conservative treatment is recommended for this type of injury, which is sometimes sufficient for meniscus tears, giving the knee time to heal itself. This process is known as RICE, which stands for rest, ice, compression and elevation. It may be supplemented with anti-inflammatory medication to reduce pain and inflammation.

However, surgery may sometimes be necessary if symptoms do not abate. In this case, the orthopaedic surgeon will usually recommend knee arthroscopy. During arthroscopy, a mini camera is inserted into the knee through a small incision, allowing visualisation of the inside of the joint. The specialist will make two or three other small incisions to access the knee and repair the injury. After surgery, the specialist will immobilise the knee. When the wounds have healed somewhat, you should start rehabilitation exercises to restore joint mobility and strength.

Orthopaedic surgeons treat problems relating to the knee and the menisci.