Colic is often associated with infants, but it can occur in adults too.

Infant colic: occurs in some babies during their first months. It refers to when a baby cries with no obvious cause and the crying lasts for more than 3 hours a day, 3 days a week for at least 1 week.

There can be different types of adult colic, such as biliary colic, renal colic and intestinal colic. Colic refers to the pain, usually associated with the intestines and urinary system. The colicky pain can occur once, or recur for weeks, months or years after the initial pain. 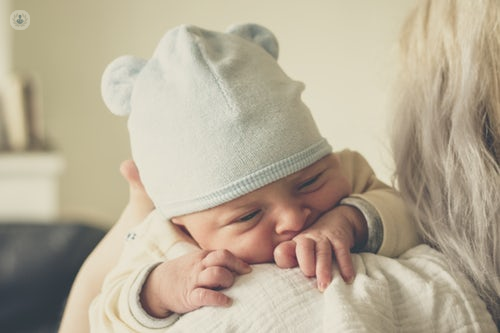 What are the symptoms of colic?

Symptoms in babies with colic include:

Symptoms of biliary colic: biliary colic is often caused by gallstones, which block the bile ducts between the gallbladder and liver, causing inflammation, pain under the right breastbone and in the abdomen.

Symptoms of renal colic: sudden and intense pain, caused by kidney or urinary stones and is usually located on one side, where the kidney stones are located. Other symptoms might include; nausea, pain when urinating and vomiting.

Symptoms of intestinal colic: intestinal cramps, caused by a blockage in the small or large intestine, causing vomiting, nausea, diarrhoea, loss of appetite and bloating.

The exact cause of infant colic is not known. However, some possible causes can be that the baby has trapped gas, is in a fussy mood and is experiencing muscle spasms as their digestive system grows or they are oversensitive to environmental stimuli, causing them to become distressed.

The cause of biliary colic in adults is mainly caused by gallstones. These bile stones block the bile ducts leading to pain and inflammation.

In the case of renal colic, the main cause is the accumulation of salts in the urine (kidney stones). Intestinal colic is caused by blockages in the large or small intestine. The blockages may be the result of an inflammatory intestinal disease like Crohn’s or IBS.

Can colic be prevented?

There are several measures that can be taken to prevent colic. To prevent infant colic, it is advised to hold the baby upright after eating, tapping on the back to eliminate any gas.

Biliary colic is usually related to gallstones, so controlling risk factors for gallstones can help, such as controlling your weight and following a low-fat diet can help towards prevention.

In cases where the patient suffers from intestinal colic, any underlying conditions that contribute to the cramps and painful muscle spasms should be properly treated, for example, IBS.

What is the treatment for colic?

A number of things can be done to treat infant colic. Sit the baby upright during feeding, so the baby swallows less air and remember to tap the baby on the back to help them burp any gas that might get trapped after feeding. Calming your baby’s senses may also help them to stop crying. Rocking your baby, holding them in a soft blanket and gently massaging their back can help to soothe them and calm them down.

Pain medication can be prescribed for biliary colic at first and a fat-free diet. If the gallbladder becomes severely painful and inflamed, then surgery to remove the gallbladder will be advised. The surgery can be done with a laparoscope and the patient can go home on the same day.

To relieve renal colic caused by kidney stones, shock wave lithotripsy (shock waves target and break up the stones, so they can pass in the urine) or a ureteroscopy (a lighted scope is placed into the urethra and bladder to remove the stone) can be used.

To investigate intestinal colic, the specialist will look into family history, the patient’s own medical history and can perform x-rays, ultrasounds and CT scans to see if there is any blockage in the intestines. If a blockage is found, it will be treated accordingly.